Thoughts on Women in SFF.

This is one of those perennial arguments that crops up time and time again, frequently being wheeled out at conventions with plenty of piss and vinegar in the mix. Lauren Beukes’s Zoo City is next on my reading list, but the female authors in my collection extend as far as Steph Swainston and K.J. Parker, who may or may not be a female author. Hardly a great example. I also have Sophia McDougall’s Romanitas trilogy patiently waiting to be read, but the fact remains that I have a host of male authors on my shelves but very few female writers.

I’ve thought long and hard about why I gravitate toward male writers and I’m still no closer to an answer. It’s not that I shun female authors or think they write exclusively with “sentimentality, a narrow view of the world”.

With this in mind I decided to do something about it. Aside from just reading Zoo City.

I’ve recently landed a full time job with Blackwell’s Books on Charing Cross Road in London. I pitched the idea of having a ‘Women Writers in SFF’ promotion. A whole bay where we promote Science Fiction and Fantasy’s unsung heroes. Sorry, heroines.

There’s only so much shelf space of course, but it’s the thought that counts. With that in mind you can expect to see the likes of Gail Carriger, Fiona McIntosh, Sarah Pinborough, Ursula Le Guin, Karen Miller, Trudi Canavan and the afore mentioned Sophia McDougall and Steph Swainston adorning a dedicated section of shelves in a week or two. And I’m not just doing this for the customers, but challenging myself to read more female writers. 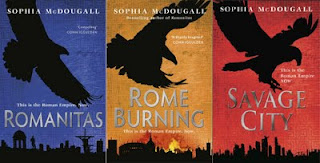 A parting shot, and something to think about, women aren’t as under represented in publishing as you may think. Jo Fletcher is widely regarded as one of the finest SFF editors in the land (UK). The Jo doesn’t stand for Joseph incidentally. Then there’s Gillian Redfearn over at Gollancz. And let’s not forget Julie Crisp at Tor, or Anna Gregson at Orbit. I freely admit that none of these ladies are authors, but the fact does pour cold water on the idea that Shadowy Male Publishing Tyrants are preventing female voices being heard.

What female writers in SFF do you rate, and why?