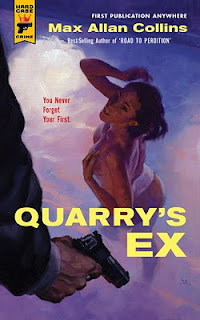 I don’t often go in for pure Hardboiled novels but decided I was well over due to make an exception. Many of my favourite SFF stories have a Noir tinge, or are unabashed hybrids that fuse Hardboiled ascetics with science (or speculative) fiction. So would I enjoy Noir with out the SFF genre trappings I was used to?

Quarry’s Ex is one in a series of novels from author Max Allen Collins who also wrote Road to Perdition. The protagonist, Quarry (not his real name), is so called because he’s stony and hollowed out, at least according to his boss. Quarry is ‘Nam Vet who is putting his skills to work by fulfilling contracts on people. As such, Quarry’s Ex is a period piece set  in the 80s. There’s a surprising amount of attention paid to which colour slacks and chinos everyone is wearing, and if they’re sporting a new polo shirt. This quickly wears thin and doesn’t seem to add anything to the plot, other than to paint 80s America as a
sartorial desert.

Quarry is no longer working for the mysterious ‘Broker’ but is a lone wolf with an unusual angle for a hitman – he neutralizes other hitmen. For a price. However things aren’t so straight forward on this assignment. Quarry’s titular ex-wife has remarried, and she’s shacked up with a movie director who’s due to meet with an untimely accident. Not only does Quarry have to deal with not one, but two hitmen, he also has to manage some old feelings and get some closure on an event that has cast a long shadow
over him.

Being a Hardboiled novel, Quarry’s Ex is told from the first person and there are plenty of quips and asides. Much of the novel takes place in and around a straight-to-video movie set, so there’s an added dash of faded glamour and a lot sex. Everyone is having (or rumoured to be having) sex with everyone else. Even Quarry’s ex-wife who is in a marriage of convenience still manages the horizontal mumba twice a month with her cheating husband we’re told.

Quarry’s Ex is fun, fast and racy read. It won’t take long to read being just 208 pages. I’m pleased to say I couldn’t work out who had taken out the contract on the hapless movie director from the cast of possible culprits.

Quarry’s Ex is available from Titan Books and is just one of many on their Hard Case Crime imprint.
No comments: 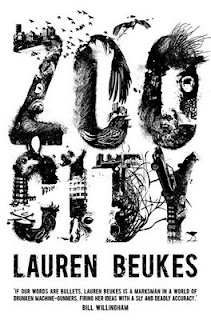 It almost feels redundant writing anything about a book that has already won the prestigious Arthur C. Clarke Award, not to mention one of the coveted tentacles from the Kitschies. Instead I’ll compare it to two other novels that I’ve enjoyed, ones that sprang to mind as I turned the pages of Beukes compelling second novel.


The thing that struck me most about this story was how it resonated with Tim Powers’s Last Call and William Gibson’s Neuromancer. Not obvious bedfellows I grant you. Allow me to (attempt to) explain.

Gibson’s short, clear and confrontational prose owes much to the Noir tradition (of which I’m still woefully unread). So it goes with Zoo City. Zinzi December is straight talking ex-journalist and recovering addict. It only goes to serve the novel that prose is unvarnished and heavy-hitting. This isn’t to say Beukes’s sentences and paragraphs are rough and unfinished, instead that they convey a world where the veneer of social pleasantry has peeled back, or burst altogether, like a weeping blister.

Another point Zoo City shares with Neuromancer is that both deal with people living at the extreme fringes of society, making ends meet where ever they can, but frequently falling foul of the law and a system that no longer cares for them, something of a perennial topic this decade. Zinzi is under no illusion that she’s circling the bottom, but there’s a fighter’s spirit in both her dialogue and the prose of the novel. Note also how Zoo City is written in the first person, another nod to noir (or Hardboiled) detectives of the 30s and 40s.

<Spoiler Warning>
Tim Power’s novel Last Call is a desolate road trip through the heart of an occult America, where a powerful individual challenges poker players to a game called Assumption. I felt there was an element of this character in Beukes’s character Odi Huron, who employs the protagonist, Zinzi, to find a missing person. Huron is a powerful music mogul with a shadowy past and it comes as no surprise to discover he is much more than he seems.

Much of Zoo City is concerned with the animalled population (those with familiars) who have mashavi (supernatural gifts) and how they use these powers in the real world. This too made me think of Last Call, where the normal world is subtly subverted to allow for magical to seep in, but is still firmly attached to technology and the trappings of contemporary living. What Beukes does so masterfully is create a mid noughties world where people with familiars are now a new underclass, not readily accepted socially, but impossible to ignore.

I’d recommend all of these books if your ‘to read’ pile is looking a little low. Gibson and Powers are well worth discovering, and Beukes has already marked herself as one to watch in a genre that is crying out for fresh, female blood (and not in a Stephanie Meyers way I hasten to add).

As an aside, Zoo City scores bonus points for having a female, black lead in a genre that declares itself progressive but clings to white male, protagonists with conservative tenacity. Zinzi never once flounders around after her love interest, navel gazes about her situation or needs rescuing. She’s fully formed, hard as nails, jaded and fallible. That she’s also a smart cookie with a cunning and devious mind only makes her more likable as a protagonist.

It’s difficult to sum up quite how good Anno Dracula is. Vampires have steadily become less Transylvanian devils and more brooding Byronic heart throbs in recent times. There’s also the image problem that vampires have largely been consumed by the Paranormal Romance genre. Fortunately Kim Newman wrote Anno Dracula twenty years ago when vampires were still grotesque, and one can assume he’d write them the exact same way if he wrote the novel now. Twenty years is a long time, and Titan Books have very wisely re-issued this great story along with a superb cover.

Newman’s tale is a ‘what if’ of not just story-telling, but literary proportions – the question being ‘What if Van Helsing failed to destroy the titular villain of Bram Stoker’s classic novel?’. A daunting undertaking that Newman not only pulls off, but absolutely hammers down like a wooden stake. With Queen Victoria remarried to the Wallachian Prince, London finds itself in flux. A new upper class of the ab-dead quickly rise through the ranks of the Government, the foreign and ruthless ruler imposes increasingly draconian punishments, and people of every strata of society find themselves adjusting to a new breed of citizen.

The new-born vampires are at least as dangerous to themselves as anyone else, often unaware of what to do in the aftermath of their first death. And then there are religious fundamentalists, claiming the end is nigh and demons are walking the streets. A fact increasingly hard to dispute in the face of Prince Vlad’s excesses and tyrannical strangle hold on fair Britannia.

Into this mix comes Charles Beauregard, of the Diogenes Club (a shadowy sort of proto-MI5) and Geneviéve Dieudonné, a vampire not of Dracula’s own bloodline, and free of the taint that corrupts the former Count Dracula. However, Beauregard and Dieudonné are not seeking to remove the Prince Consort, but rather stem a flood of killings occurring in Whitechapel. Horrific murders are two a penny in the grim streets of London in 1888, but the carnage inflicted on vampire prostitutes carry hallmarks of a particularly cunning killer.

Newman does a fantastic job of taking the surviving cast of Stoker’s novel and pitting them against the consequences of their former actions (and in some case, lives) and the new emerging ruling class. This is a perfect confection of horror, romance and politics, and is by turns genuinely unpleasant and incredibly tender. There are so many great characters in Anno Dracula I’m looking forward to re-reading it, just to meet them all again, and immerse myself in London’s mist shrouded streets.