I’ve been tinkering away at various creative projects for the last few years and now find myself in the unusual spot of seeing them come to fruition. Here’s a quick catch-up: 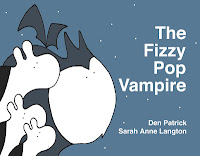 First and foremost of these is The Fizzy Pop Vampire, which I wrote about Here. I never really intended to be a children’s book author, but I had an idea and ran with it. Then Sarah Anne Langton got hold of the idea and she ran with it too. You can buy it from the Apple Store. And of course there is the obligatory Faceache Page, where you should ‘Like’ it, naturally. 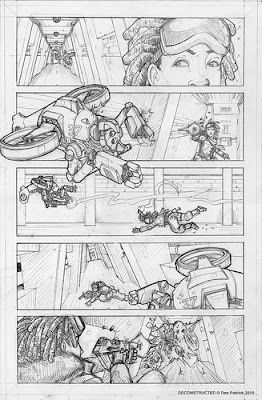 The second project has recently shown the faint stirrings of life after a spell of hibernation. DECONSTRUCTED is a five issue Science Fiction comics series I wrote back in 2010 and the early part of 2011. It follows the fortunes of a salvage crew (and their Engineer Sophie in particular) as they embark on a mission to an icy planet shrouded in mystery.

DECONSTRUCTED has its own blogger site, which is worth checking out for the art. I chunter on about the obvious influences that informed the script in various posts, which allows me to wax lyrical about film too.
I’m not unusual in being a massive Geek and wanting to write comics. I’m possibly a little different in that I opted for creator owned instead of wanting to write about men in spandex for DC and Marvel. I’ve always preferred my own worlds to the ones other people create.

There’s more sketchy goodness over at the Faceache page too, set up to largely encourage Chris Christon to get scribbling. Shannon Gallant and Andie Tong have also contributed art to the project, along with character designs by Julian Parry.

One plate that seems to be spinning quite nicely all by itself is the ebook edition of Pandemonium: Stories of the Apocalypse. This impressive (digital) tome features great stories from Lauren Beukes, Jon Courtenay Grimwood, Tom Pollock, Lou Morgan, Andy Remic and Kim-Laikin Smith (along with a few others, including yours truly).
Pandemonium is available from the Amazon Store.

Anne and Jared (who are my favourite Geek Culture terrorists bar none) edited Pandemonium. If you enjoy their work why not check out other releases from Jurassic Publishing such as Pandemonium: Stories of the Smoke and the Pandemonium Stocking Stuffer 2011.

And then there’s The Boy With The Porcelain Ears, that I’ve been writing, reading, re-reading, tinkering and teasing into shape for over a year now. Porcelain is set within a medieval setting where things are not quite what they seem. There’s a distinct absence of High Fantasy races and magic, think instead Gormenghast with a great deal more sword fights and bad language. You can read a first draft of the first chapter here. Not content with writing one novel set in this world I’ve also started the follow up, which is intensely fun. No agent, publisher or plans for these novels just yet.

Lastly, there is the secret project, which I can’t talk about just yet, but is a total game changer for me. Those of you who follow me on Twitter will know that ‘secret project’ has been taking up quite a lot of 2012. What you might not know is how much fun I’ve had whilst writing it. Which is to say, plenty.