Just a short post this week. A quick round up of news – I know people do actually use the blog as a way of keeping up with Planet Den (or The Republic of Den as I like to call it). 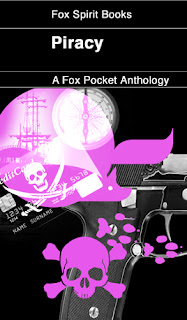 I’m pleased to announce I have a short story in the forthcoming Piracy anthology by Fox Spirit Books. My story focuses on an unnamed pirate who is complicit with the theft of rather unusual treasures. I’m delighted that my story opens the anthology and am looking forward to reading the works of the other writers. You can see the full list of contributors here.

My short story Red Hot Hate is still available. You can pick up the Kindle edition of A Town Called Pandemonium from Amazon.

Blackwell on Charing Cross Road London also have physical copies on their shelves and will send them out to you if you ask nicely.

Those of you money to burn may like pre-order The War-Fighting Manuals from Amazon. Those of you that love bookshops should buy them there in due course.

I’ve had some good fortune and am copywriting for a large fashion website. I may even blog here about clothes at some point. Anything could happen. The commute has given me a lot of reading time, during which I’ve digested the chilly Wolfhound Century by Peter Higgins, the excellent Gun Machine by Warren Ellis, and have begun Red Moon by Benjamin Percy, which has some very strong opening chapters. I may write at length about these in the future.

My own writing begins anew on June 1st, when I’ll be working on the third draft of The Boy Who Wept Blood – which is the second book of The Erebus Sequence. Until then I’m happy reading and writing the odd short story.

I’ve just had a portrait shoot with the lovely Lou Abercrombie. You may know her on twitter as @LadyGrimdark. She’s a photographer, mother of three and married to some hooligan by the name of Joe Abercrombie. I’m told he also writes books and is ‘pretty good’. Lou also has the best hair in Somerset. This is a fact.

Pictures of my brooding brow will no doubt appear here in the not too distant future.