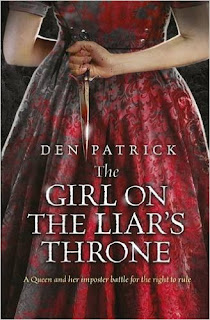 The concluding part of The Erebus Sequence is released this January, on the 21st no less. I’m doing a couple of events to celebrate the publication of The Girl on the Liar’s Throne. And I’ve got company.

British Fantasy Award nominated authors Jen Williams and Ed Cox will be joining me at Blackwells, Holborn on the 19th January. We’ll have a brief discussion of Fantasy and writing from 18:30, before getting down to the time honoured tradition of signing books and drinking wine.

This is a free event, but you can sign up to Eventbrite to help the shop prepare for the number of attendees.

Keen to share out talents with the land (well, Hampshire) Jen, Ed and myself will be venturing to Forbidden Planet in Southampton on Saturday 23rd January. We'll be signing from 13:00 until 14:00.

Again, this is a free event, so come along and grab signed books from all three of us while we escape the confines of London.

Fear not if you are unable to join me at these events, as I'll be at the Forbidden Planet London Megastore on the 12th February with a stellar line up of new and established talent. Marc J Turner, Adrian Tchaikovsky, Pete Newman and myself will be signing books from 18:00 - 19:00.

Please spare a thought for the book shops who go to so much effort to provide these events. The best way you can say thank you is to buy books in the store on the night of the event.

If you’re late to the party (fashionably or otherwise) don’t despair. The first two books of The Erebus Sequence have already been released.

The Boy with the Porcelain Blade has been described as ‘a solid and brilliant book with a unique and engaging voice’ by Starburst Magazine.

The second book, The Boy Who Wept Blood, garnered attention from the Morning Star who wrote ‘this engrossing story of political intrigue, swordplay and hidden horrors has a truly distinctive flavour'.