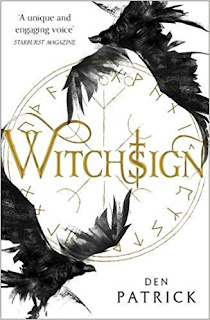 Where the hell have you been?
This blog has been in torpor for some time now, like a vengeful spirit waiting to rise once again, or some other over-written metaphor.


Is there a point to this?
Yes! There is news! Part of the reason I’ve not been updating the blog is that I’ve been working on a new series and I can finally talk about it. Witchsign is the first book of The Ashen Torment, and will be published by Harper Voyager on 24th May 2018 in the UK.  I’ve set aside the Gothic, Italian stylings of The Erebus Sequence and gone for an Epic Fantasy rooted in the traditional pseudo-European setting more common to genre.


So how did this all start? The original seed of inspiration went something like ‘What if Harry Potter was sent to Russian Hogwarts only to find out he was a Muggle?’ A lot has changed since that initial thought, not least because my ‘Harry’ is called Steiner, an illiterate, blacksmith’s son of eighteen summers. It was perhaps after the second draft I realised the book was really about family, the ones we’re born into and the ones we choose. It also became apparent that Steiner’s kid sister, Kjellrunn was going to need a lot more screen time so to speak. Kjell, as she is known in the book, had a whole bunch of new chapters written for the third draft.


What about the bad guys?
Kjellrunn wasn’t the only character in the book that asked for more limelight. The Vigilants of the Holy Synod stalk the continent of Vinterkveld, searching for children with the taint of magic upon them, the ‘Witchsign’ of the title. One such character is Silverdust, who went from being a minor character to having a significant arc of his own. Vigilants wear masks to hide their identities and are often in competition with each other for promotions. There is also a schism within the Holy Synod between the hard line Vigilants and less popular progressives, who seek a different way of doing things.
You said something about Russian Hogwarts? Children displaying the taint of magic are taken away by the Vigilants. The population of the Solmindre Empire and the Scorched Republics believe the children are killed at a secret location.

Sounds like a short book in that case.
Very funny. The children aren’t killed when they reach the island of Vladibogdan. They are instead trained to use their powers in service to the Empire, according to one of four elemental schools.

You’ve been playing a lot Dungeons and Dragons and Magic the Gathering haven’t you?
Do you want to hear about this book or not?

OK, I’ll be quiet.
Steiner has the misfortune of finding himself on Vladibogdan and soon discovers much that has remained hidden, both in his own family and to the continent of Vinterkveld. And to make matters worse it will only be a matter of time until the Holy Synod revisit his family.

And it’s a trilogy, right?
You guessed it. So buckle up and get ready, because there’s an entire Empire that needs to be brought down, and it’s going to need heroes (and readers) to get it done.

But next May is such a long time to wait.
I agree, but you can always read my previous trilogy while you’re waiting.